What do you think?
– Dolly Singh 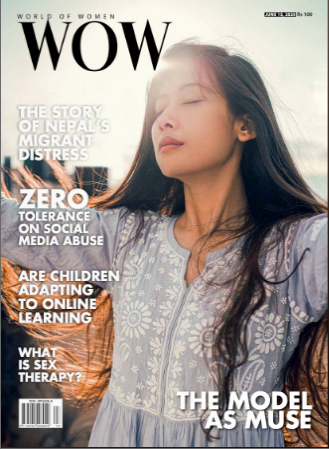 Zero Tolerance policies are not as effective as we think it would be in reducing violence. However, when women and girls are repeatedly objectified and their bodies hyper-sexualised, the media contributes to harmful gender stereotypes that often trivialise violence.

Zero tolerance is a much-needed campaign in today’s time. Thanks to actress Nisha Adhikari Malla who initiated it and found a big number of supporters. However, I strongly believe the campaign should not limit itself to only women’s issues
and should not become a feminist movement. Even men are victims of cyberbullying and sexual assault though they may be in minority right now. If this campaign supports and fights for every cause that faces any kind of bullying and assaults manages to build everyone’s support including a large sector of men and media of Nepal; this can be a revolutionary campaign. It also shouldn’t be a fight against media and celebrities. We should all go hand-in-hand. My only concern is that it shouldn’t die a short death like the “Me Too” movement that started in India which came, became big and then vanished, without proper legal action. 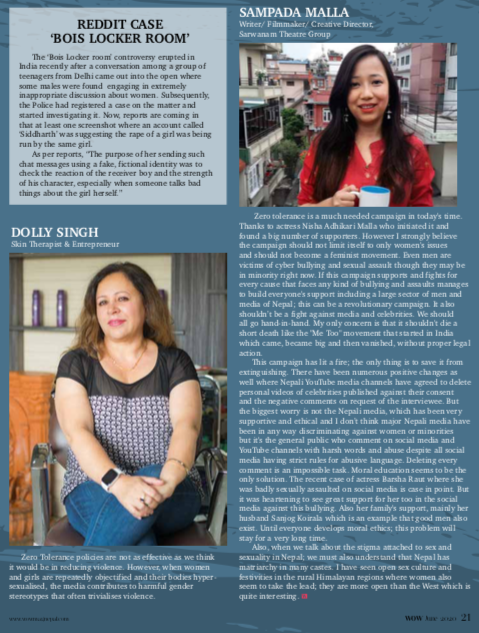 This campaign has lit a fire; the only thing is to save it from extinguishing. There have been numerous positive changes as well where Nepali YouTube media channels have agreed to delete personal videos of celebrities published against their consent and the negative comments on request of the interviewee. But the biggest worry is not the Nepali media, which has been very supportive and ethical and I don’t think major Nepali media have been in any way discriminating against women or minorities but it’s the general public who comment on social media and YouTube channels with harsh words and abuse despite all social media having strict rules for abusive language. Deleting every comment is an impossible task. Moral education seems to be the only solution. The recent case of actress Barsha Raut where she was badly sexually assaulted on social media is case in point. But it was heartening to see great support for her too in the social media against this bullying. Also her family’s support, mainly her husband Sanjog Koirala which is an example that good men also exist. Until everyone develops moral ethics; this problem will stay for a very long time.

Also, when we talk about the stigma attached to sex and sexuality in Nepal; we must also understand that Nepal has matriarchy in many castes. I have seen open sex culture and festivities in the rural Himalayan regions where women also seem to take the lead; they are more open than the West which is quite interesting.